On September 16, 2011, the Supreme Court of Tennessee held that a woman who earned $72,000 a year was not entitled to lifetime alimony (permanent alimony) from her higher-earning ex-husband.

In Gonsewski v. Gonsewski, 2011 WL 4116654 (Tenn. Sept. 16, 2011), Johanna and Craig were married for twenty-one years with two adult daughters.  Johanna earned $72,000 a year in an IT position and Craig earned more than $137,000 a year as an accountant.  At the trial level, the court declined to award spousal support of any type to either party.  The Court of Appeals reversed the trial court’s judgment and ordered the husband to pay the wife lifetime alimony in the amount of $1,250 per month until her death or remarriage.  The court reasoned that, although there was no need for economic rehabilitation given that Johanna was a college graduate and had a steady career, alimony in futuro was ‘necessary to mitigate the harsh economic realities of divorce’ due to the disparity in the parties’ incomes.  Craig appealed.

The issue before the Tennessee Supreme Court was whether permanent alimony should be awarded to a spouse who has a college degree, good health, a stable work history in a relatively high paying job, and a lack of demonstrated need for such long-term alimony.  The court reversed the appellate court decision, noting that it is unlikely that both parties will be able to maintain their pre-divorce lifestyle given two persons living separately incur more expenses than two persons living together and there was no abuse of discretion by the trial court.  Thus, Johanna should not be awarded permanent spousal support.

This decision affirmed Tennessee’s traditional analysis of considering both ability and need in making permanent alimony determinations.  While Craig may have had the ability to pay lifetime alimony, Johanna did not have the need.  In California, courts consider need and ability to pay when setting temporary spousal support, which may be ordered after separation pending trial.  However, when setting permanent spousal support, the court must consider approximately fourteen statutory factors, including need and ability to pay, when determining permanent spousal support.  As such, it is likely that the Gonsewski case would have been similarly decided in California grounds given the higher standard provided by the fourteen factors set forth in section 4320.

*Certified Family Law Specialist, The State Bar of California Board of Legal Specialization 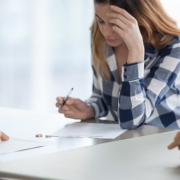 How to Get A Divorce When Your Spouse Doesn't Want One

Trouble in Springfield: The Simpsons and Changing Family Structures

How to Choose a High Net Worth Divorce Attorney in San Jose, CA

DIY Divorce Success: The Exception, Not The Rule